Gaza \ ICHR concluded today a training course titled (Standards of Use of Force According to the Human Rights-Based Approach). This training which targeted 30 officers of the Security and Protection Apparatus covered standards of human rights respect by law enforcement agencies while carrying out  their duties.

Brigadier Bahgat Abu Sultan, General Director of the Security and Protection Apparatus, stressed the importance of commitment to the rules of law and respect of human rights. He thanked ICHR for organizing this training course and called on the participants to benefit from the information and experience given.

Jameel Sarhan, Deputy Director General of ICHR in Gaza, stressed the duties and obligations of the law enforcement agencies while resorting to the use of force as an exceptional measure. He emphasized that these agencies should honor the right to dignified life and work to ensure the rule of law as well as respect of human rights.

Attorney Bahgat al-Hilw, training coordinator in Gaza, clarified that the aim of this training course is to raise awareness of participants about human rights principles, rule of law, and principle on the use of force and firearms, especially that of proportionality and self-restraint as well as failure of other means to work. 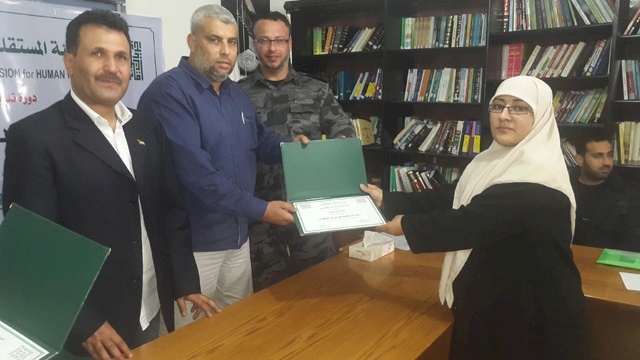